by Nick Gromicko & Mike Marlow
Electrical panels are boxes that house circuit breakers, which are are safety devices that stop the electrical current if it exceeds the safe level for some portion of the home electrical system. 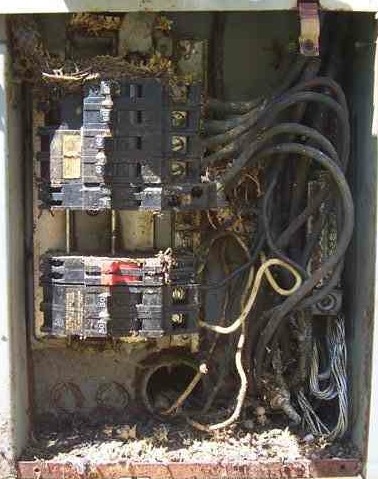 Many people, even experienced electricians, have been killed or seriously injured while opening electrical panels. In 1991, an Atlanta electrician was killed while attempting to inspect a panel that had a faulty spring-loaded bus-bar assembly. Apparently, the bus-bar was moved while the electrician was opening the panel, causing an arc and a lethal electrical explosion. Generally, two factors contribute to these situations:  defective components and complacency.

As an optional safety measure, use a voltage ticker to make sure the box is safe to touch. If the alarm sounds on the device, have the box examined by a qualified electrician. Also, safety glasses and other personal protective equipment may be used to protect against burns and electric shock.

While removing the panel cover, inspectors should:

Inspectors check for the following defective conditions during an electrical panel inspection:

In summary, electrical panels are potentially dangerous and should be inspected with care.
To schedule your home inspection, click the "Schedule an Inspection" button above or call 210-202-1974.
Tagged:
Home Inspection Reports: What to Expect
Final Walk-Through Checklist